They say that climbing routes in the Italian Alps are not as safe compared to the routes in the Austrian or Slovenian Alps. They lack fixed cables and footholds, Vie Ferrate (iron ways) are often left neglected and it is not a rarity to see a washed out trail marking. Memorial plaques of mountaineering casualties keep reminding us that the task is not to be taken lightly. After all, the Italian Alps can prove challenging for even an experienced mountaineer or alpine climber.

It wasn’t meant to be…

Climbing the second highest peak in the Julian Alps (2753 m / 9032 ft) is a good indicator of one’s physical condition and at that moment this was the first peak of the season Žiga and I intended to climb. It was at the end of July, prospects were good, expectations were high… but not for long.
After a good hour of walking and almost 500 m (1640 ft) of ascent a beautiful morning turned into dubious conditions. Layer of clouds emerged from north-west and the rain that came along was the sign to turn back and leave the mountain. Trust me, you don’t want to get caught by a lightning storm in the mountains.
Well, it later turned out to be just a passing cloud formation and to our regret the sky cleared up in two hours. It was a bit frustrating at the time but we were able to partially fix that with a couple of cold austrian beers.

Let’s do it again!

Not a month has passed when we were all fired up and ready to do it again, still under the influence from our escapade of Triglav night climb. Luka also came along this time.

At exactly 6 AM and 6°C, Žiga, Luka and I were ready to start our ascent from Altopiano del Montasio (plateau on the southern side of Jôf di Montasio at 1500 m/4920 ft). In about 20 minutes we reached refuge Giacomo di Brazza (1660 m / 5446 ft), a nice cottage where you can eat or stay over night or just have a nice beer. From here on there is a one-hour beautiful green pasture walk with a magnificent view over the plateau and mountainous massif rising from east to west. Sunlit peaks glowing in purple and orange just added the magic to the whole experience.
When we reached the edge of the pasture at about 2200 m (7220 ft) we took a little sandwich break. The view was pleasant but the temperatures for sure were not. Cold wind that blew over the mountain pass was something we could easily do without. Freezing in sweated T-shirts made our stop short. We quickly put on the safety harnesses (ferrata set), helmets and gloves and off we were again.
At this point the terrain starts to get dangerous and falling rocks are not uncommon, so »safety first«.

We agreed to take the left route – Findenegg Couloir (Via Findenegg) and then descend on the right side of the mountain, down the Pipan’s ladder (Scala Pipan). We didn’t know what to expect but surely the videos and photos we have seen were tempting enough to make us take this »left« route.
To tell you the truth, we were somewhat confused, not knowing exactly, if this was the right route or not. Faded markings were hard to spot and in the next thirty minutes of walk we barely gained any altitude. The path lacked fixed cables or any other protection, so wearing the ferrata set seemed a bit useless at that point. High probability of slip and crumbling rocks above our heads gave us an additional sense of insecurity.
At about 9.00 we reached the bivouac Suringar. The cosy bivouac is fixed right at the westmost corner of the mountain at 2400 m (7874 ft) overlooking the valleys and mountainous regions further to the west (northern Italy, Dolomites). We stopped there for a few minutes to take some photos and have a sip of energy drink, then we proceeded further to the north.
After about a hundred meters on narrow path with precipitous wall on the right and a five-hundred-meter drop on the left, we realized that we have chosen the wrong route. Via Amalia leading towards bivouac Stuparich and then back down to Val Saisera, the valley on the northern side, was not what we expected. »It must have been the other poorly marked route we saw some ten minutes back«, we said to each other. »Let’s go back!«. And back we went.

Finding the right trail but still uncertain which route it was, we rapidly started to gain altitude. Within twenty minutes of steep climb, crumbling rock, narrow passages and an exhaustive use of all four extremities, it was becoming clear to us that descending here would be suicide. »There is no way we are going back the same way!«, I said to Žiga and Luka in semi-serious manner, »If this is the only way down, we might just as well call the helicopter to come and pick us up.«
Every so often we stopped to catch our breath, have a drink and take photos of scenery we seldom see. That was pretty much the routine for the next hour until we got to the ridge where the Austrian Alps came into our view. The nightmare is over!

A sigh of relief

Just a few minutes shy of 10.30 we reached the peak. Jôf di Montasio was finally conquered! The fact that there was actually a way down the mountain on the other side also elevated us and made everything else seem like a piece of cake from that point on.
We took our time at the top. Each of us had another sandwich or two and looked around with enjoyment and satisfaction, identifying peaks in the east, towards Slovenia, and already making plans which mountain to conquer next.
As the sun heated the moist of soaked ground in the valley below, foggy clouds started to emerge. Light wind was pushing them upwards over the peak and presented us with a dramatic show. In less than ten minutes we were engulfed in a mass of clouds. It was time to go.

Almost the entire time on our way down we were accompanied by capricorns. Whole families of them were posing for our cameras and didn’t seem to care much about our presence. The path was undemanding and quite safe. Clouds would intermittently clear up but most of the time during our descent we were surrounded by fog.
When we reached the Pipan’s ladder we had to wait for austrian mountaineering comerades to climb up. 60 meters (197 ft) of rungs is a bottleneck that can keep you waiting for a while. After descending the ladder and yet another hundred meters or so we reached a scree. “If we go down this way we’ll be much faster,” we reckoned. At this time all we could think about was Hirter Privat Pils, an austrian beer you can get at the refuge Giacomo di Brazza. Mincing the stones under our feet we rushed down the mountain.

The first to quench our thirst, the second for our pleasure

Arriving at the refuge, we got ourselves a nice little bench, freed our sore feet from heavy shoes and ordered that much deserved beer. Cheers! Utter enjoyment.
After a couple of beers and a mandatory shot of blueberry schnaps, we cheerfully headed back towards the car, where an unpleasant surprise was waiting for us. But that’s another story. 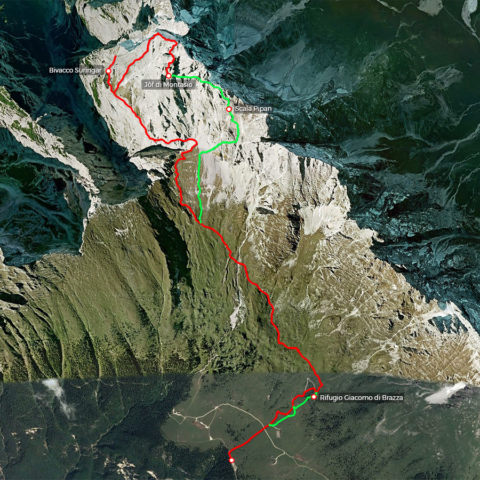 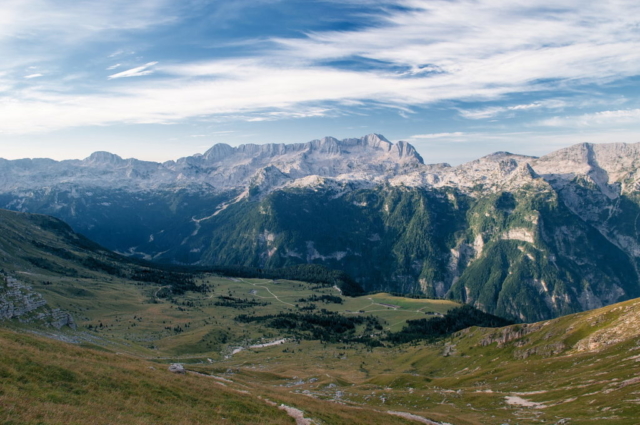 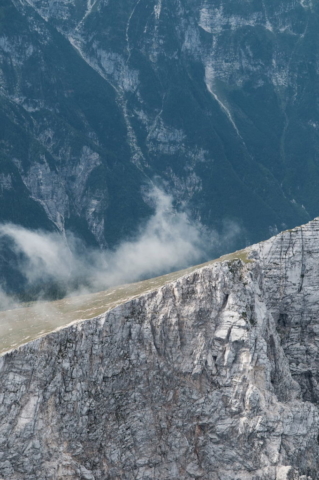 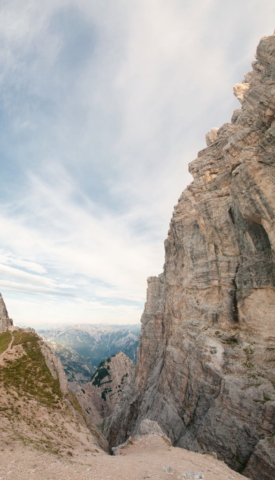 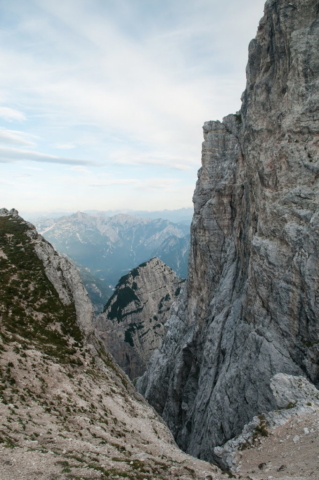 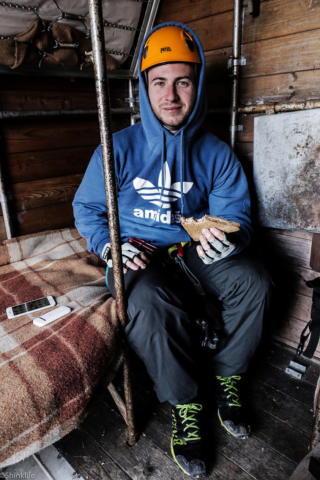 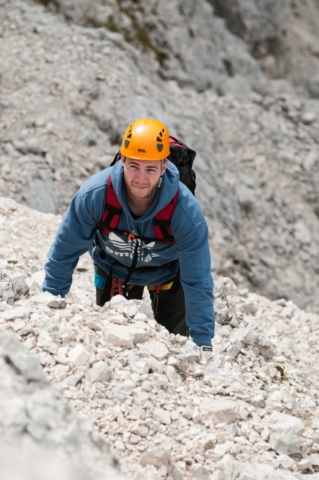 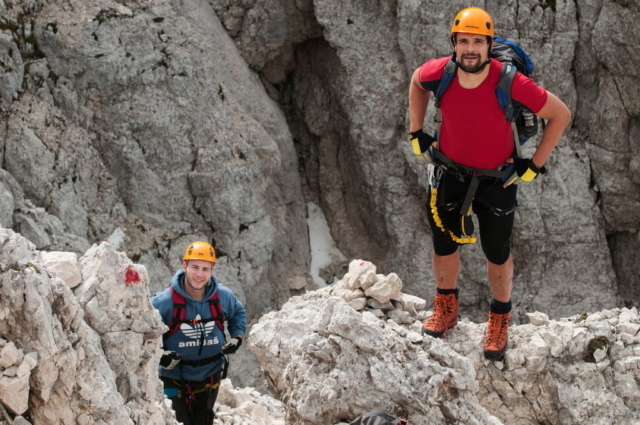 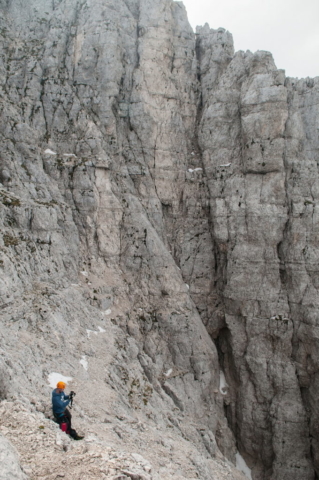 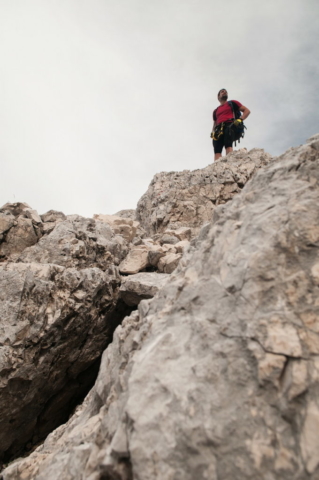 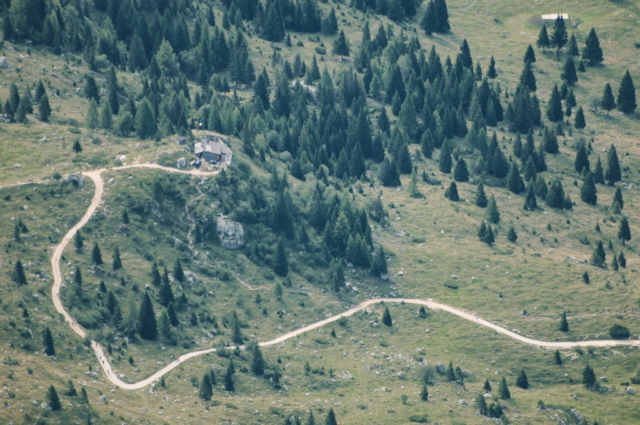 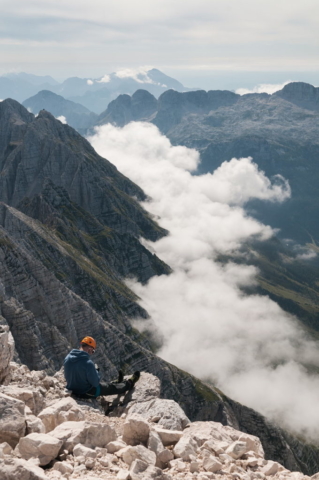 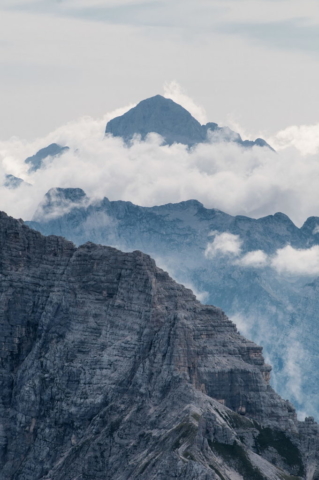 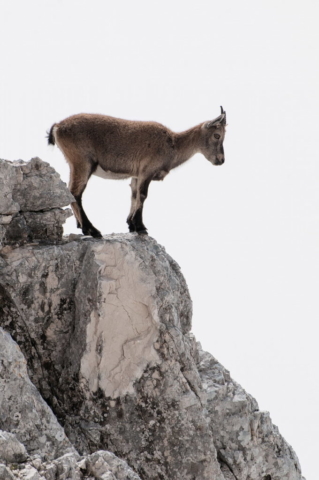 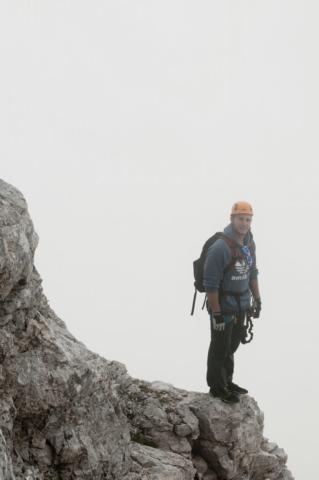 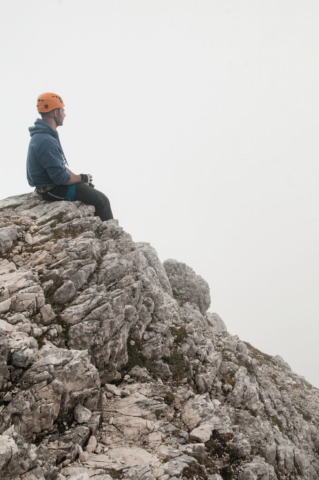 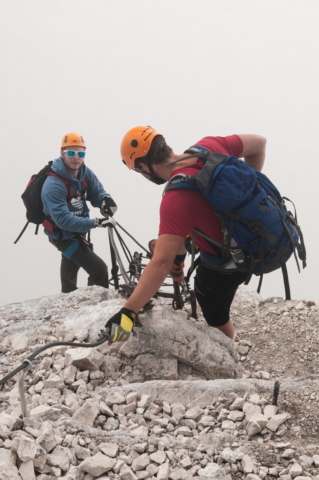 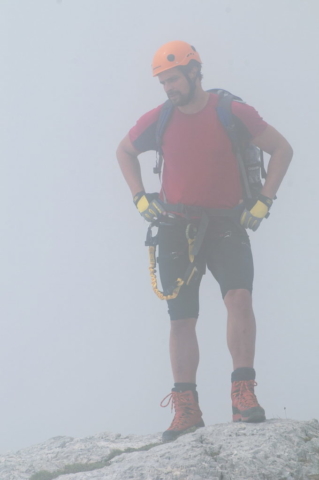 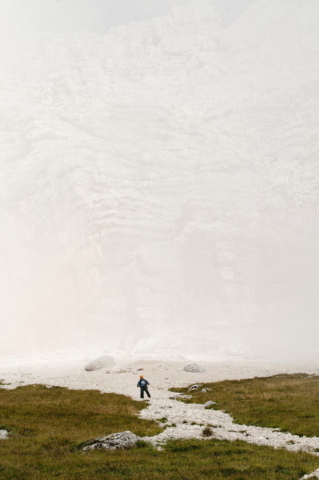 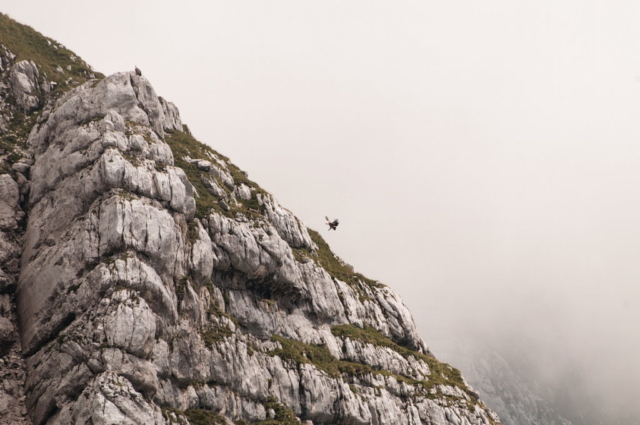 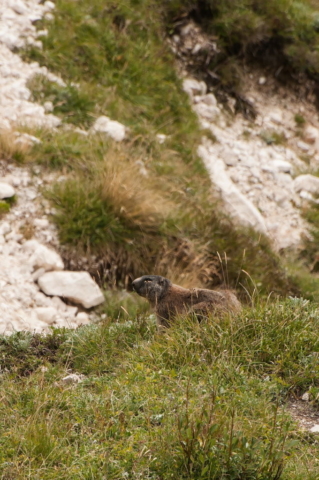 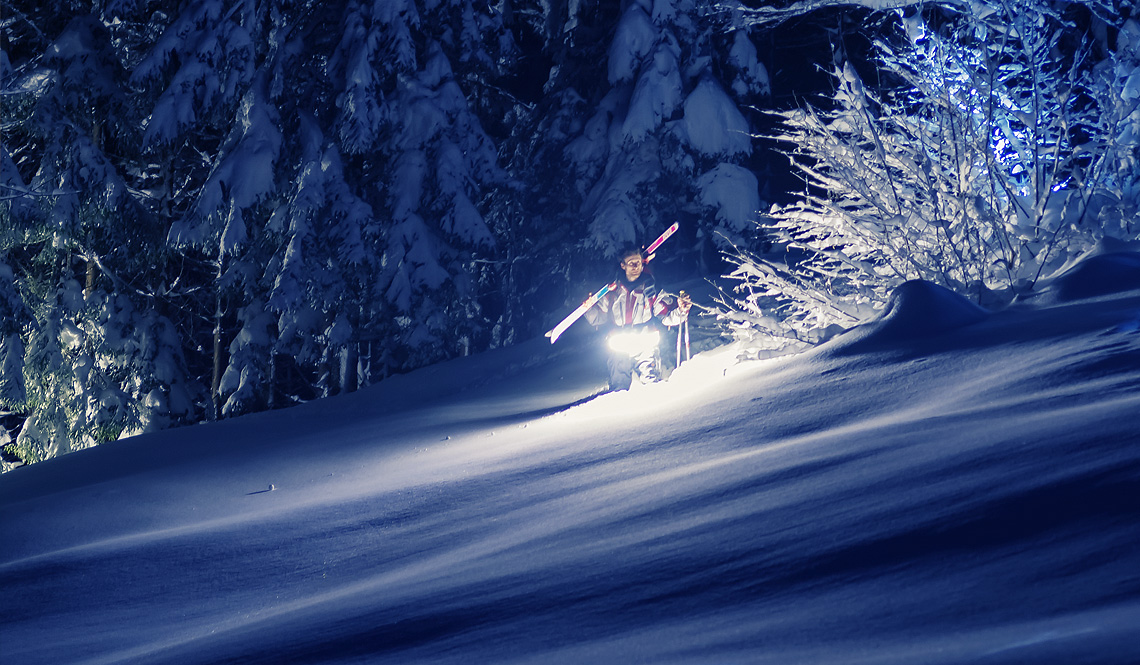 By Robert - 0 Comments
Great news for anyone who loves winter activities. We tested OliLight on snow and it has proven to be an excellent piece of gear ... 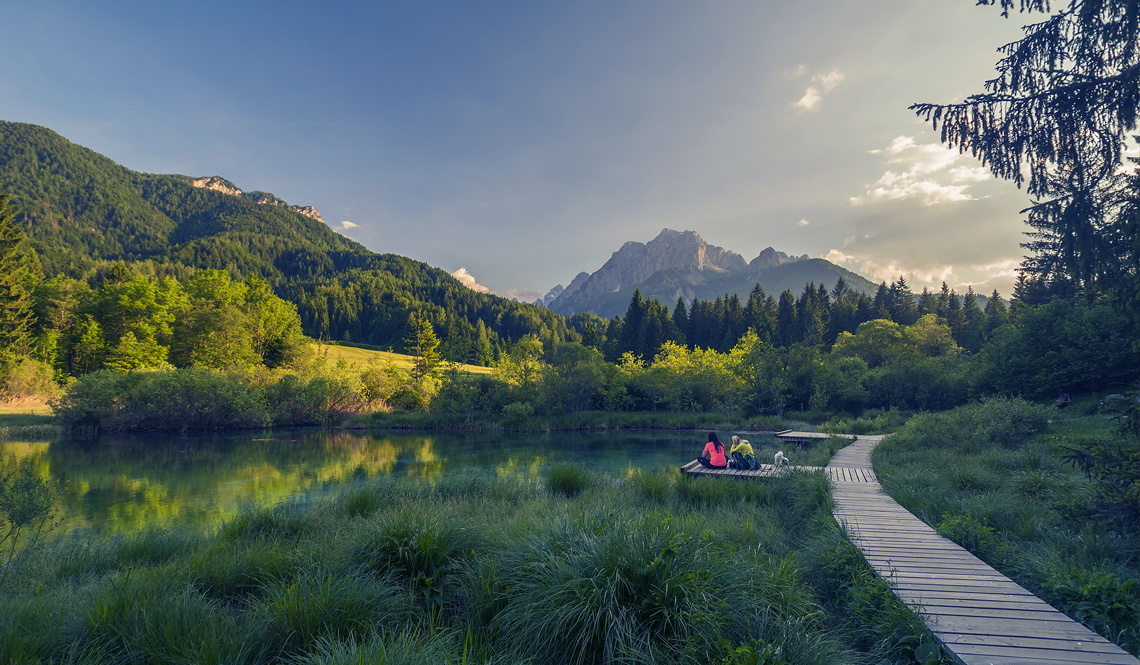 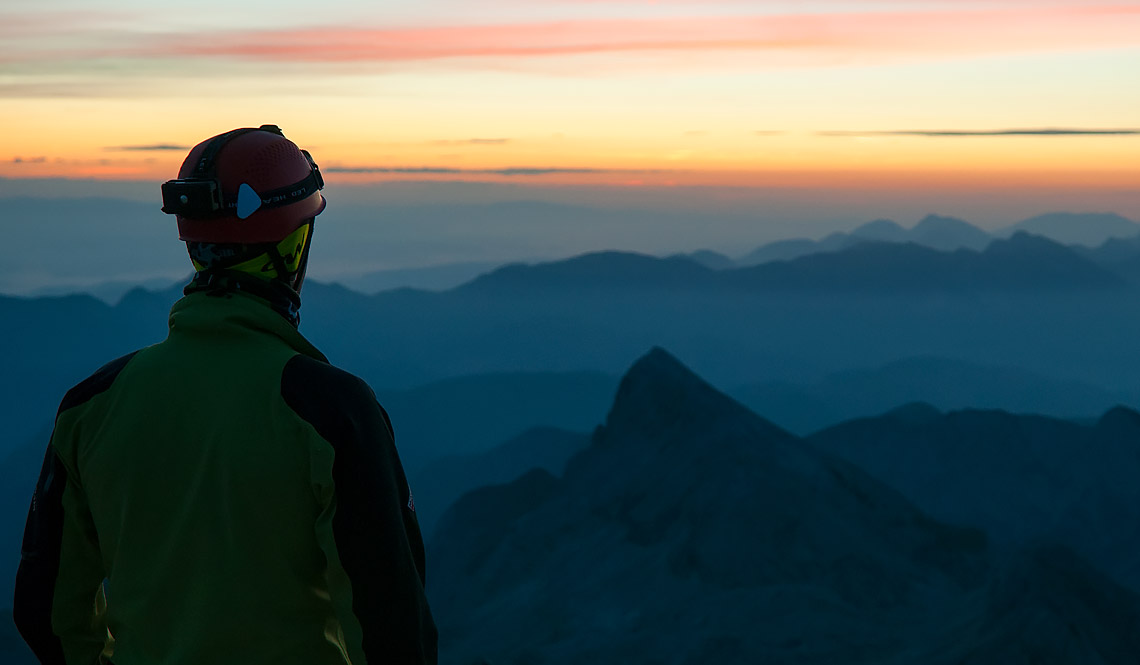 Chasing the sunrise to Triglav

By Robert - 0 Comments
The forest was dark and still. You could hear the ominous sound of crumbling rock in the distance. We were the group of 22 ...